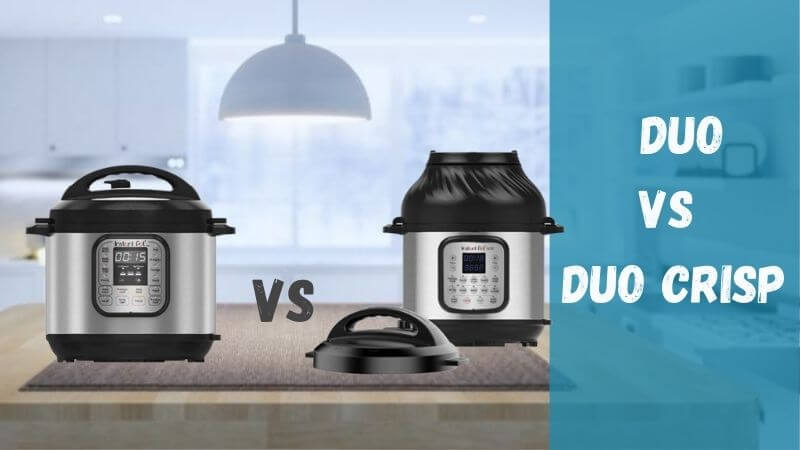 Instant pot duo and duo crip are two similar kitchen appliances. Both of them are popular. People often get themselves in difficulties while comparing these two pressure cookers as they have a number of similar features. Therefore, identifying the subtle difference is not easy. In this article, I am going to differentiate Instant pot duo and duo crip so that you can understand which one is going to be better for you.

Below is a list of cooking functions that are missing from both of these pressure cookers.

You will find these cooking functions in many other Instant Pot pressure cookers. Therefore, if any of these functions are important to you, then you may look for the other available models of Instant Pot.

Other features common to both these models

Instant Pot Duo and Duo Crisp both are integrated with advanced safety features. Both of them can cook up to 70% faster than the competitors. Other than these, both of the models have a one-touch cooking program feature.

Other features missing from both these models

Instant pot duo has a 3 qt variant. The duo crisp model has only 6 and 8 qt variants but does not have 3 qt one. Therefore, if you are looking for a small size pressure cooker, then DUO has a solution for you.

The standard duo version of Instant Pot has 7 in 1 function. But the duo crisp one has 11 in 1 feature. The additional function that you will find in duo crisp are air fry, broil, dehydrate, roast, bake, and sous vide. However, rice cooker and yogurt maker options are missing in duo crisp but you can still prepare yogurt in it by setting the temperature and time manually.

Other features that are different

Instant Pot Duo or Duo Crip – Which one is the winner?

Instant Pot Duo Crisp is undoubtedly ahead of Instant Pot Duo comparing all the features and specifications. If you are looking for a Pot that is integrated with an air fryer and dehydrator, then Duo Crisp should be the choice. These additional cooking functions are the prime selling point of this model.

On the other hand, Instant Pot Duo will be suitable for you if only a pressure cooker and other basic cooking options are sufficient for your daily cooking. The price of this unit is also very competitive. Overall, the value for money of Instant Pot Duo is great. Therefore, it is not a bad option either.