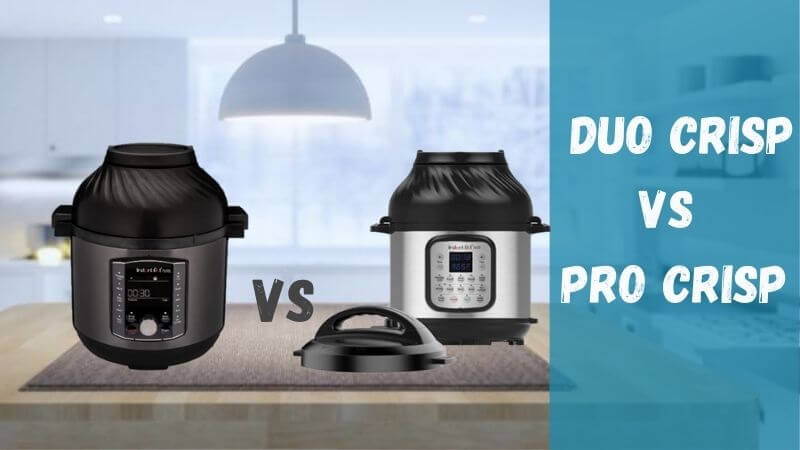 Which Instant Pot is the best? This is a common question among the users. It has a number of popular models such as Pro Crisp, Duo Crisp, Duo Plus, Duo, and so on. Most of these Instant Pots are quite similar in features. Therefore, we often become confused when comparing them. In this article, I’m going to help you differentiate different Instant Pot Models and identify the best one.

Instant Pot Pro Crisp and Duo Crisp are two popular kitchen appliances. When the users try to make decisions between these two, they find themselves in confusion as these models are quite similar. In this article, I am going to remove the confusion by telling you the subtle differences between Instant Pot Pro Crisp and Duo Crisp models. I hope after reading this, you will be able to make a better decision.

Both of the models have 11 cooking functions. All the functions are in common to both. Among the functions air fry, roast, dehydrate, and broil are the functions that you expect from a convection oven such as Ninja or Emeril.

Other functions include slow cook, sous vide, saute, pressure cooker, and so on. However, although both the models have can dehydrate, to avail of this feature on a large scale, you need a full-fledged dehydrator.

Cooking functions absent in both

The above functions are absent in both Instant Pots. None of them have the yogurt maker option. Instant Pot Duo or Ultra can be good options if yogurt is an important function for you.

None of the models have the sterilize function as well. Although all the Instant Pots do not have this function, Instant Pot Ultra can be a good option for this feature.

Apart from these, none of the models have rice cooker options like Instant Pot Nova or EVO. On the other hand, the ultra program is also absent in both the models that you may find in Instant Pot Ultra model.

Cooking functions that are different

How do these two models differ from each other?

If you look at the table of comparison, you will see that most of the features of Instant Pot Duo Crisp and Pro Crisp are the same. Pro Crisp is an upgraded version of Duo Crisp. Therefore, it has a few more advantages over the other. The Pro Crisp model has an inner liner, an additional lid for the pressure cooker, and a temperature setting option. Apart from these, the Pro Crisp model has a whisper-quiet steam release system.

On the other hand, the heating element of Instant Pot Duo Crisp has a higher wattage. The rated power of this unit is 1500W whereas the power of the competing model is 1200W. Duo Crisp offers a far better price as well.

Pro Crisp or Duo Crisp – Which one is the winner?

Instant pot duo and duo crip are two similar kitchen appliances. Both of them are popular. People often get themselves in difficulties while comparing these two pressure cookers as they have a number of similar features. Therefore, identifying the subtle difference is not easy. In this article, I am going to differentiate Instant pot duo and duo crip so that you can understand which one is going to be better for you.

Below is a list of cooking functions that are missing from both of these pressure cookers.

You will find these cooking functions in many other Instant Pot pressure cookers. Therefore, if any of these functions are important to you, then you may look for the other available models of Instant Pot.

Other features common to both these models

Instant Pot Duo and Duo Crisp both are integrated with advanced safety features. Both of them can cook up to 70% faster than the competitors. Other than these, both of the models have a one-touch cooking program feature.

Other features missing from both these models

Instant pot duo has a 3 qt variant. The duo crisp model has only 6 and 8 qt variants but does not have 3 qt one. Therefore, if you are looking for a small size pressure cooker, then DUO has a solution for you.

The standard duo version of Instant Pot has 7 in 1 function. But the duo crisp one has 11 in 1 feature. The additional function that you will find in duo crisp are air fry, broil, dehydrate, roast, bake, and sous vide. However, rice cooker and yogurt maker options are missing in duo crisp but you can still prepare yogurt in it by setting the temperature and time manually.

Other features that are different

Instant Pot Duo or Duo Crip – Which one is the winner?

Instant Pot Duo Crisp is undoubtedly ahead of Instant Pot Duo comparing all the features and specifications. If you are looking for a Pot that is integrated with an air fryer and dehydrator, then Duo Crisp should be the choice. These additional cooking functions are the prime selling point of this model.

On the other hand, Instant Pot Duo will be suitable for you if only a pressure cooker and other basic cooking options are sufficient for your daily cooking. The price of this unit is also very competitive. Overall, the value for money of Instant Pot Duo is great. Therefore, it is not a bad option either.

Instant Pot Duo Vs Duo Plus

Instant Pot Duo and Duo Plus are two almost similar models of pressure cookers from Instant Pot. They are quite popular models with a lot of positive comments from the users. These models have a number of similar features. Therefore, it is sometimes difficult to find the subtle difference between these two. In this article, I am going to differentiate Instant Pot Duo and Duo Plus. I will show the similarities and dissimilarities of these models so that you can make a better decision while choosing the right one.

Cooking functions that are common

Instant Pot Duo is a 7 in 1 pressure cooker. Therefore, it has 7 cooking functions. The above table shows all the features of the Duo model.

On the other hand, Duo Plus is a 10 in 1 multicooker. It has 10 functions including all the 7 features that the standard Duo model has.

The capacity of these two Instant pot pressure cookers is similar. Both of them have three different capacity variants – 3 qt, 6 qt, and 8 qt. If you choose the 8 qt variant, then it can cook for 8 persons in a single batch. The other two size variants for small families.

Both of them look alike. They have a mixed color of stainless steel and black. The power of the heating element of both of the models is the same. The control panel of both models is also similar.

Cooking functions that are absent in both models

From the list above, it is evident that both of the Instant Pot pressure cookers are missing with so many cooking features that other Instant Pots have. Therefore, check the list whether you need any of them. For example, if you need air fryer feature, then none of these models will be suitable for you. Instant Pot Pro Crisp or Duo Crisp models have air fryer function ( air fryer vs instant pot).

Cooking functions that are not common

Advantages of Instant Pot Duo ( Over Duo Plus)

Advantages of Instant Pot Duo Plus ( Over Duo)

What is the use of Sous Vide feature of the Duo Plus model?

Sous Vide is a cooking process, especially for meat and fish. It needs vacuum sealing the food first. Then the food needs to be immersed in hot water. This technique is used to make the meal gourmet quality.

Which model between Instant Duo and Duo Plus has better value for money?

Duo or Duo Plus – Which One is the winner?

Instant Pot Duo Plus is the winner by a mile. It is an updated version of the standard Duo model with added cooking functions. The price of this unit is not increased that much compared to the added value. Therefore, I’d highly recommend making your decision on Duo Plus.

However, if you do not want the sterilize and sous vide features, then Instant Pot Duo is also not a bad deal. But I do not see any reason for choosing this one just for saving a few bucks.

2 thoughts on “Instant Pot Comparison | Which Model Is The Best?”