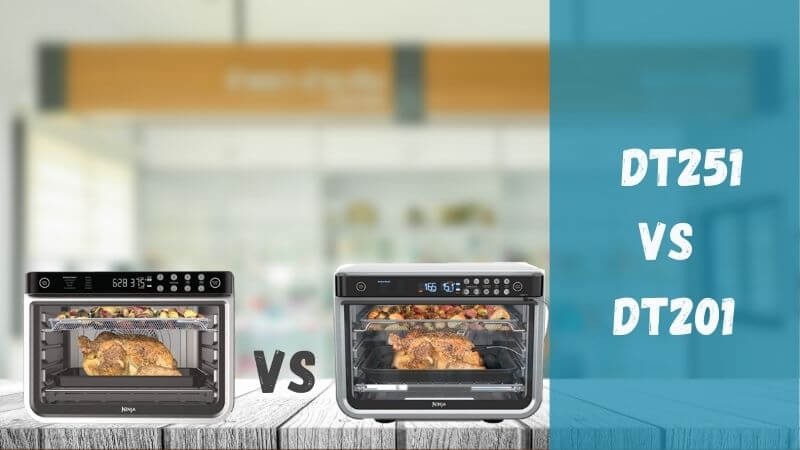 Ninja Foodi DT201, DT251, and DT200 are three similar air fryer and convection ovens. All of them look alike and have very similar features. Therefore, it is difficult for the users to differentiate and choose the right model for them. In this article, I am going to make a comparison among Ninja DT201, DT251, and DT200 to find out the similarities and differences. After reading the article, you will understand which model will be a better deal for you.

Difference between Ninja DT201 Vs DT251

Similarities between DT201 and DT251

Both of these Ninja Foodies have exactly the same capacity, size, and dimension. They can accommodate at most 12 lbs of food in a single batch. Therefore, these are extra-large capacity countertop air fryers and convection ovens. They are good enough for a large family and are equally good in terms of capacity. If you are in a small family and looking for a standalone air fryer, then Ninja AF101 or AF161 will be sufficient for you.

Ninja DT201 and DT251 have exactly the same number of cooking preset options. Both of them have 10 presets including dehydrate, roast, toast, pizza, air fry, reheat, bagel, and so on. Therefore, both of the models are the winner for this feature.

Both of these Ninja Foodies have a digital control panel with touch buttons.  Therefore, both of them will provide almost equal quality in terms of this feature.

However, people also look for the similarities and dissimilarities between Ninja DT251 and SP101.

Dissimilarities between DT201 and DT251

Ninja DT251 has an integrated smart thermometer. With this feature, you can set your target temperature and monitor the actual achievement. Therefore, you do not need to depend on guesswork. DT201 does not have this feature.

DT251 is slightly more costly than its counterpart. It has only a few features more than DT201. However, I think the extra cost is justified compared with the added values.

From the above comparison, you may already have an idea that both the Ninja air fryer and convection ovens have almost the same features. DT251 has a smart cooking system. Other than this, it has exactly the same feature that the DT201 model has. Ninja DT251 costs around 10% more than the counterpart that is justified for the added feature. Therefore, none of the models is a clear winner. If you do not care about smart cooking features, and you do not need temperature controlling features, then DT201 is quite sufficient. But if you cook recipes that need strict temperature control, then I would recommend Ninja DT251.

Comparison between Ninja DT200 and DT201

Similarities between Ninja DT200 and DT201

Apart from the size and capacity, both of these Ninja Foodi have exactly the same internal and external design. The control panel of these units is almost the same. Both of them have digital control panels with manual push buttons.

Differences between DT200 and DT201

Below are the cooking functions of both the air fryer ovens.

An air fryer convection oven must have the ability to reach a temperature of around 100F to have the dehydration function. Ninja DT201 has a wider temperature range. Therefore, it can dehydrate fruits and vegetables and broil meat and fish at high temperatures as well.

None of these models can grill. I would recommend checking the Ninja Foodi grill models if smokey grilled foods are your favorite.

Considering the features and benefits, Ninja DT201 is the winner (check price). It has the dehydrate function. Therefore, you can prepare dehydrated fruits and vegetables with this model. It is a bit more pricy for this additional feature. On the other hand, Ninja DT200 will be preferable if you already have an air fryer with the dehydrator function or a full-fledged dehydrator.