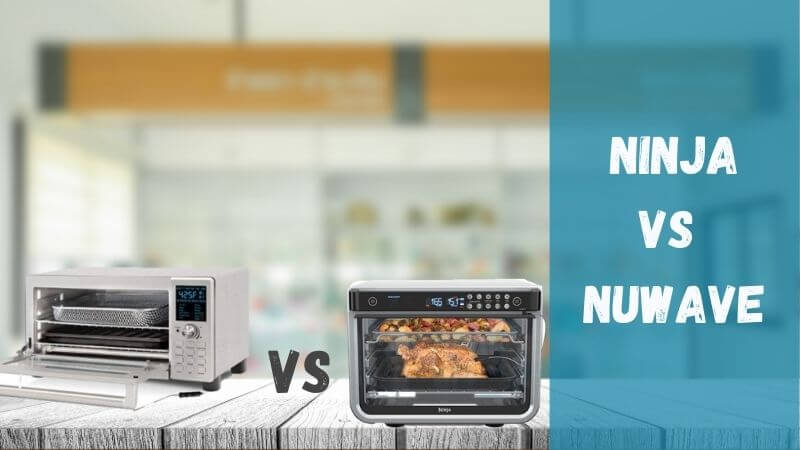 Nuwave and Ninja both are two popular air fryer brands. Both of them have quite a number of air fryer and convection oven models in the product basket. In this article, I am going to compare Ninja and Nuwave air fryers. After reading, you will know what features and specifications of these two air fryers are similar and what are different. I think it will help you make a better decision.

SP101 and Nuwave Bravo XL are two popular air fryers and convection ovens. Both of them have similar features. Before discussing further, let’s find out the specifications of these two kitchen appliances.

Ninja SP101 has 8 preset cooking functions including air fry, roast, broil, bagel, and so on. On the other hand, Nuwave XL has 12 preset functions including dehydrating, grilling, toasting, baking, reheating, defrosting, and many more. If you do not like to set the cooking parameter manually, then Nuwave XL will be the better choice.

Nuwave Bravo has a smart temperature controlling feature. It has a digital probe that can control the temperature that you set for a specific recipe. Therefore, it can save the food from overcooking. Ninja Foodi SP101 does not have this feature.

Both of the air fryer and convection ovens have almost the same capacity. Therefore, they are suitable for a large family having 8 persons or more.

Both of them have a manual control knob with a digital display. I would say both of them are user-friendly and good for the elderly. Bravo XL has few more control buttons than the SP101.

Ninja Foodi SP101 or Nuwave Bravo XL – which one is the winner?

Comparing all the features, I think Nuwave Bravo XL will be the better choice. It has a smart temperature controlling system that is absent in its counterpart. Bravo has a wider temperature range, more cooking presets, and a bit more cooking capacity. All these extra features you are getting with an expense of a little less amount of money compared to SP101.

But Ninja Foodi SP101 is not far behind Nuwave Bravo. Therefore, if you are obsessed with the brand Ninja, then you can opt for it with no confusion.

Check Latest Price
You may read our article to know the difference between Ninja Foodi SP101 and DT251.

These are another pair of convection ovens that we often become confused to pick from. Before comparing these two, let’s see the specifications side by side.

Both the air fryer and convection ovens have almost similar cooking capacities. Both of them are suitable for a large family.

Both of the convection ovens have a wide range of working temperatures. Both of them are capable of cooking at a very low temperature as well as at a high temperature.

Both of the convection ovens have a powerful heating element having a rated power of 1800W. Therefore, both of them can cook pretty fast.

Ninja Foodi XL Pro has 10 cooking presets where the counterpart has 12. Both of them have almost similar cooking presets. Therefore, if you are not convenient with selecting the cooking parameters on your own then both of these models are good for you.

Ninja Foodi DT201 vs Nuwave Bravo XL – Which one is the winner?

After considering all the points that I have discussed, it is clear that Nuwave Bravo XL is the ultimate winner of these two models. It has a great value for money and a temperature controlling system.

Ninja DT201 is the winner if you do not consider the price in your judgment. It has a premium look with a stainless steel body. It has almost all the features that you expect from a good quality air fryer and convection oven. Therefore, it will not be a bad deal either if you are Ok with spending some extra bucks.

Now let’s compare another pair of popular air fryer and convection ovens. Although these two models are not similar, they are so popular that we are discussing their features and specifications.

DT201 and DT251 are two similar air fryer and convection oven models of Ninja. To find out the differences between these models read our article.

Ninja Max XL or Bro 6 QT air fryer – Which one is better?

Comparing all the above features, I think Nuwave Brio 6 quart air fryer will be a better choice. The value for money of this unit is great. It has a smart temperature controlling system. The temperature range of this air fryer is also great.

On the other hand, Ninja Max XL AF161 is also a good option but a little bit pricey. The ceramic coated basket is a unique feature of this unit. But it does not have a precise temperature controlling option.