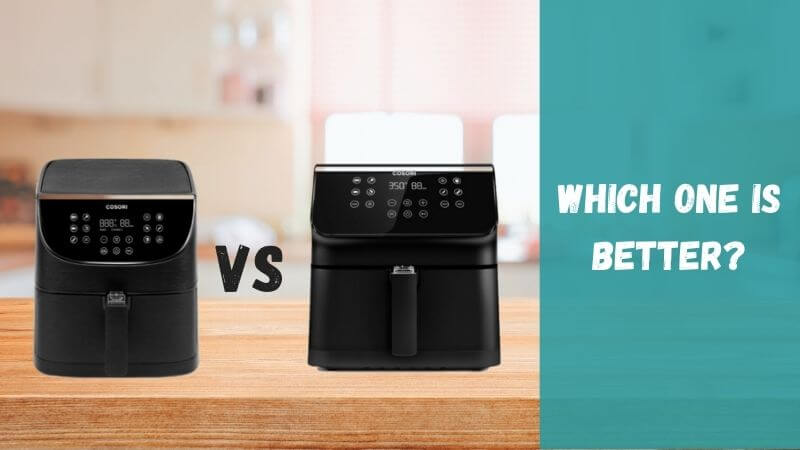 COSORI is one of the most popular air fryer brands in the market. It has so many models to cater to different customer segments. Max XL and Large XL are two different models of COSORI 5.8 quart air fryer. Both of the models are very popular among the users. In this article, I am going to discuss the differences between COSORI 5.8 quart Large XL and Max XL models. After the read, you will come to know the differences in the features of these two popular COSORI air fryer.

Both Max XL and Large XL models have the same basket capacity of 5.8 quarts. Therefore, it will be sufficient for cooking in considerably large batches. If you are living in a large family having members of 4 or more, then both of these models will be enough for you considering the basket capacity.

Both of the models have equivalent dimension and shape. The square-shaped air fryers are easier to keep on the countertop compared to the rectangular shaped ones. On the other hand, the Large XL model is lighter than the counterpart. Its weight is around 12 lbs while the other weighs around 17 lbs.

Both of the air fryers have a similar temperature range of 170F to 400F. There is no advantage in any model over the other. With this temperature range, the user can cook in as usual modes such as grill, bake, roast and air fry. However, none of the models can dehydrate foods nor has special cooking modes such as air broil and so on.

Although the control panel looks similar, COSORI Max XL has one preset cooking function more than the counterpart. The large XL model has 10 preset functions. Apart from these, both of the models have ‘keep warm’ and ‘preheat’ functions on the panel.

COSORI Max XL has three different color variants – black, red and white. On the other hand, the large XL model has one color variant – black. Although both of the models look quite similar, I like the Large XL model more as it looks elegant to me. But I also like the red variant of the Max XL model as well.

Which one is the winner?

Honestly speaking, COSORI Max XL and Large XL are 90% similar if we consider the functionality. Therefore, I’d say that both are equally good. Aesthetically, I prefer the design of Large XL. But it does not have any color variant other than the black one. My final opinion is that, as the Large XL model is the latest 5.8-quart air fryer of COSORI, it is preferable.

We have written a fully comprehensive article on the Max XL model. To read the article, click here.