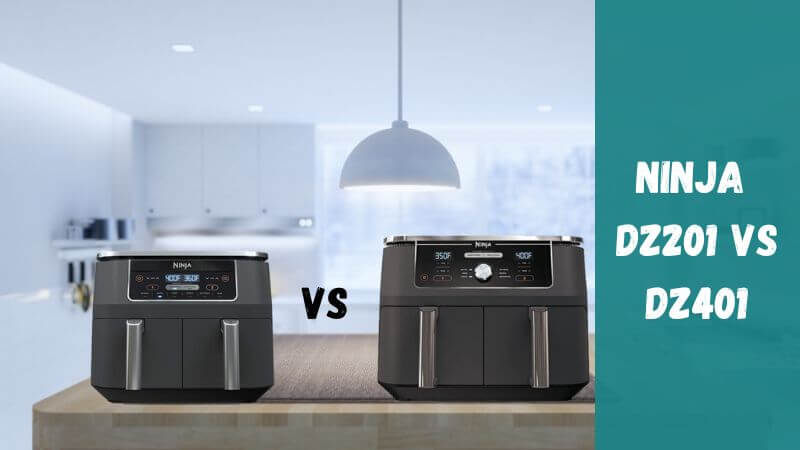 Ninja Foodi DZ201 and DZ401 are two popular dual basket air fryer models. They have a number of similar features and a few subtle differences. Both models are great for making delicious and healthy meals. However, there are some key differences between the two models that you should be aware of before deciding which one to buy. In this article, I will discuss the similarities and dissimilarities between these two models and try to suggest you the better one. Keep reading!

Similarities between DZ201 and DZ401

The design of both the Ninja Foodi air fryers is almost the same. They have the same color and shape. Although the design of the control panels is a little different for both these air fryers.

Differences between DZ401 and DZ201

The design of the control panel is another difference between these two air fryers. Although they have exactly the same cooking functions on the panel, DZ401 has a manual knob to change the functions. On the other hand, DZ201 has individual buttons to control the cooking functions.

As the capacity of the DZ401 model is higher, the price of this unit is higher as expected. The additional price of DZ401 is justified as per the added benefits.

Although both of the dual basket air fryers are almost similar, I would still prefer the DZ401 model. It has more cooking capacity than the competing model. Capacity is a decisive factor when choosing the right air fryer. Another reason I like this model is the manual control knob. It is easier to handle and more user-friendly. As the price of this unit is not that high, Ninja Foodi DZ401 will be a better choice than DZ201.